Regularly, we interview one of our members to learn more about them and to let the general public discover the interpreting profession. 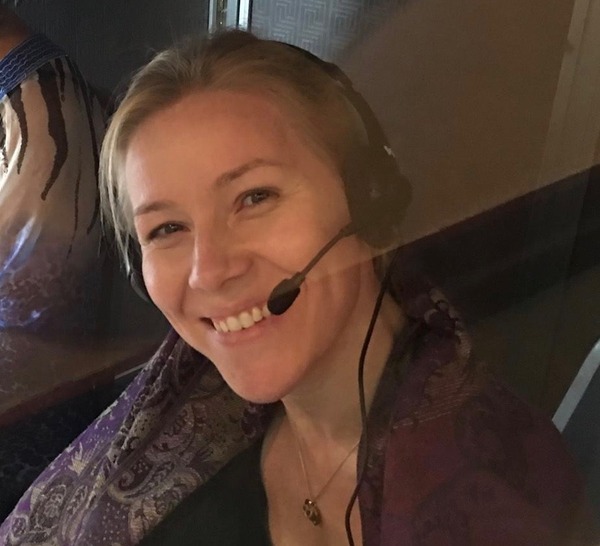 Based in: Berlin, Germany and São Paulo, Brazil

Where did you study? What is your educational background?

After earning a baccalauréat scientifique I decided to study at the Institut Supérieur d'Interprétation et de Traduction (ISIT) in Paris, where I was enrolled in the translation program from 1997 to 1999. I then lived abroad for a year (as an international student in the United States and as an intern in Germany) before resuming my studies at ISIT from 2000 to 2002, specializing in terminology. During this time, I also took classes in note-taking and an introduction to consecutive interpreting. I discovered that I really liked it, so I decided to pursue interpreting at the Monterey Institute of International Studies (MIIS) in California. I graduated in May 2004 with a Master of Arts in Conference Interpreting.

What is your favorite part of your job?

Since I am very curious, I enjoy getting a glimpse of many different areas and markets. One day you'll find yourself on a construction site with engineers, explaining how a new type of sunroof works, the next you'll be at a medical conference about cochlear implants or in a plenary session discussing good governance in the MENA region. Or you might also find yourself accompanying an artist during a performance...

You learn a lot, it's never – or very rarely – boring. But I guess this variety also stems from the fact that I work mostly in the private sector and have a wide range of clients. A typical EU interpreter might see things differently.

Do you travel a lot for assignments?

People often think interpreters travel all over the world in business class... Unfortunately, this is not the case – at least not anymore.

I usually work in Berlin or in other cities nearby. Once I was flown to Thailand with an entire team, but that was really an exception.

Can you describe how you prepare for assignments?

To prepare for an assignment, I begin by checking if I've already interpreted a similar conference or topic in the past and, if so, I dig out the corresponding glossary. I then read through all the preparation material provided. This can be one or two speeches – or sometimes ten presentations! I try to be very focused as I read, checking the terminology and looking online for related content in the target language. I try my best to prepare for at least half a day before each assignment. This can be tricky during high season, but I would be very uncomfortable arriving at a conference completely unprepared. Sometimes we aren’t given any prep material at all. In those cases, I look up the speakers' bios online, check if they have speeches on YouTube or have published anything. I don't know how our colleagues did it before the Internet, but these days you can always find something, as long as you have a name or a theme.

Can you describe the worst scenario you ever experienced at work?

Well, most of the time everything goes smoothly. But I have been in a few "extreme" situations. Once a colleague and I were booked for simultaneous interpreting and when we arrived, the client asked us where our equipment was. They assumed we would bring along our own booth! Or a booth was provided, but there was no technician... Now I always double or triple check to make sure the client knows that we only provide the actual interpreting service.

I also remember one medical workshop during the summer: it was 36 degrees Celsius (97F), there was no air conditioning, and my colleague insisted we put a floor fan in the booth because the conference room was small and we couldn’t leave the booth door open. Needless to say it was still very hot in there and we could barely hear the speakers because of the noise.

Do you have any advice for beginners?

When I started interpreting, a colleague told me "It's never too early to learn another language" and she was right. I would advise beginners not to rest on their laurels once they graduate, but to continue learning: another language added to your combination is always a useful asset.

I would also tell them to practice with peers, listen to recordings of themselves to “hear” potential shortcomings (ums and ahs, breathing, repetitions...) and to be open to feedback.

Can you describe a situation where you thought your job was really useful/critical and made a difference?

I wish this were the case all the time! Most of my jobs involve English and French, and people often say "Everybody speaks English nowadays, are you really needed?" I think I am because people frequently overestimate their language skills. It's when I interpret from German or Portuguese to French, though, that I notice that people are really grateful because they’d be lost without me.

But to come back to the actual question: I remember one mock UN conference with teenagers from all over the world. They were allowed to express themselves in the UN languages plus German. It was amazing to see how mature and articulate they were. At the end of the meeting, a French participant came up to us and said that the conference had made her aware of how important good, professional communication is. She was really thankful, and it made my day.

Who should we interview next?

I would like to invite Pawel Kozlowski to be the next interviewee.

How to reach Céline Corsini

About interviews
Cookies help us deliver our services. By using our services, you agree to our use of cookies. Learn more